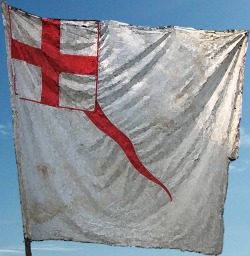 16th January: Again Nottingham is attacked by Royalists in a two pronged assault. Troops from Newark, 2000 men under Sir Charles Lucas breach the Nottingham defences and overrun part of the town. On the other side of town 1000 Royalists from the garrisons of Belvoir and Wiverton are beaten off allowing Hutchinson to turn the whole weight of his garrison onto the Newark troops. After a day of fierce street fighting the Newark troops are forced out of the town and routed. It is reported that one could follow a trail of frozen blood on the snow for two miles along the route to Newark. February The garrison of Nottingham raid She[ford Manor and return with many horses and cattle. March After joining forces earlier in the month with Sir John Me[drum the Nottingham garrison assist in besieging Newark.