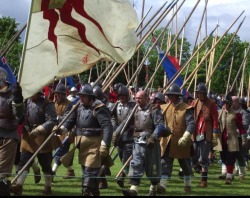 22nd August 1642 King Charles I raised his Royal Standard in Nottingham. This was his signal for assembling forces for military service and as such a declaration of war on Parliament. However, the majority of the English people did not flock to join him in his war against Parliament.

The refusal of the Nottingham Trayned Bands to comply to his Commissioners of Array resulted in him seizing the Town Magazine and dispersing the Trayned Bands. Charles left Nottingham on the 13th September 1642 with only 500 horse and five regiments of foot. 3rd January 1643: Two gentlemen of Nottingham, Sir Francis Thornhaugh and Sir Francis Pierrepont, are each called upon to raise a regiment to fight for Parliament. However, following the failure of a combined assault on Newark alongside Gell's and Ballard's forces Parliament saw the need for a strong garrison in Nottingham which could counter the ever growing threat from the surrounding Royalist strongholds.